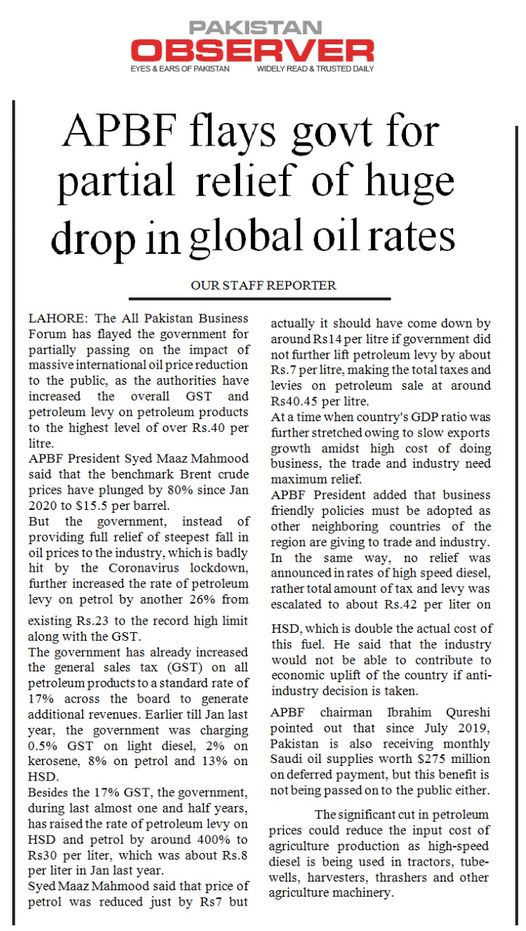 APBF flays govt for partial relief of huge drop in global oil rates
Lahore – The All Pakistan Business Forum has flayed the government for partially passing on the impact of massive international oil price reduction to the public, as the authorities have increased the overall GST and petroleum levy on petroleum products to the highest level of over Rs.40 per litre.
APBF President Syed Maaz Mahmood said that the benchmark Brent crude prices have plunged by 80% since Jan 2020 to $15.5 per barrel.
But the government, instead of providing full relief of steepest fall in oil prices to the industry, which is badly hit by the Coronavirus lockdown, further increased the rate of petroleum levy on petrol by another 26% from existing Rs.23 to the record high limit along with the GST.
The government has already increased the general sales tax (GST) on all petroleum products to a standard rate of 17% across the board to generate additional revenues. Earlier till Jan last year, the government was charging 0.5% GST on light diesel, 2% on kerosene, 8% on petrol and 13% on HSD.
Besides the 17% GST, the government, during last almost one and half years, has raised the rate of petroleum levy on HSD and petrol by around 400% to Rs30 per liter, which was about Rs.8 per liter in Jan last year.
Syed Maaz Mahmood said that price of petrol was reduced just by Rs7 but actually it should have come down by around Rs14 per litre if government did not further lift petroleum levy by about Rs.7 per litre, making the total taxes and levies on petroleum sale at around Rs40.45 per litre.
At a time when country’s GDP ratio was further stretched owing to slow exports growth amidst high cost of doing business, the trade and industry need maximum relief.
APBF President added that business friendly policies must be adopted as other neighboring countries of the region are giving to trade and industry.
In the same way, no relief was announced in rates of high speed diesel, rather total amount of tax and levy was escalated to about Rs.42 per liter on HSD, which is double the actual cost of this fuel. He said that the industry would not be able to contribute to economic uplift of the country if anti-industry decision is taken.
Syed Maaz Mahmood added that said that though oil prices in the international market are on the decline yet instead of passing this benefit to the trade, industry and public, the government started increasing number of taxes and duties on petroleum products.
APBF chairman Ibrahim Qureshi pointed out that since July 2019, Pakistan is also receiving monthly Saudi oil supplies worth $275 million on deferred payment, but this benefit is not being passed on to the public either.
He said not only the industrial but the agriculture sector would also badly suffer. He said that Pakistan’s agriculture sector is an engine of growth. The significant cut in petroleum prices could reduce the input cost of agriculture production as high-speed diesel is being used in tractors, tube-wells, harvesters, thrashers and other agriculture machinery.
The APBF leaders said that visible reduction in fuel prices would certainly bring down the cost of doing business and Pakistani products would get their due share in the international market.