$37b S. Asia trade potential cannot be exploited due to Indian aggression on LoC: APBF 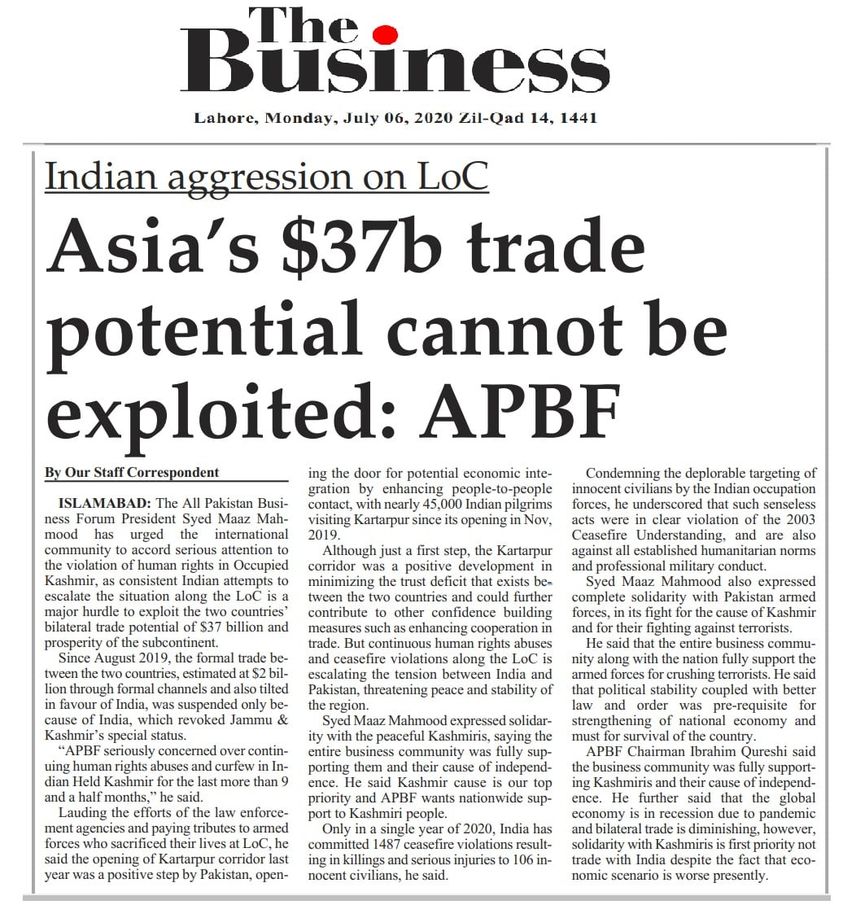 $37b S. Asia trade potential cannot be exploited due to Indian aggression on LoC: APBF

$37b S. Asia trade potential cannot be exploited due to Indian aggression on LoC: APBF
The All Pakistan Business Forum President Syed Maaz Mahmood has urged the international community to accord serious attention to the violation of human rights in Occupied Kashmir, as consistent Indian attempts to escalate the situation along the LoC is a major hurdle to exploit the two countries’ bilateral trade potential of $37 billion and prosperity of the subcontinent. Since August 2019, the formal trade between the two countries, estimated at $2 billion through formal channels and also tilted in favour of India, was suspended only because of India, which revoked Jammu & Kashmir’s special status.
“APBF seriously concerned over continuing human rights abuses and curfew in Indian Held Kashmir for the last more than 9 and a half months,” he said.
Lauding the efforts of the law enforcement agencies and paying tributes to armed forces who sacrificed their lives at LoC, he said the opening of Kartarpur corridor last year was a positive step by Pakistan, opening the door for potential economic integration by enhancing people-to-people contact, with nearly 45,000 Indian pilgrims visiting Kartarpur since its opening in Nov, 2019.
Although just a first step, the Kartarpur corridor was a positive development in minimizing the trust deficit that exists between the two countries and could further contribute to other confidence building measures such as enhancing cooperation in trade. But continuous human rights abuses and ceasefire violations along the LoC is escalating the tension between India and Pakistan, threatening peace and stability of the region.
Syed Maaz Mahmood expressed solidarity with the peaceful Kashmiris, saying the entire business community was fully supporting them and their cause of independence. He said Kashmir cause is our top priority and APBF wants nationwide support to Kashmiri people.
Only in a single year of 2020, India has committed 1487 ceasefire violations resulting in killings and serious injuries to 106 innocent civilians, he said. Condemning the deplorable targeting of innocent civilians by the Indian occupation forces, he underscored that such senseless acts were in clear violation of the 2003 Ceasefire Understanding, and are also against all established humanitarian norms and professional military conduct.
Syed Maaz Mahmood also expressed complete solidarity with Pakistan armed forces, in its fight for the cause of Kashmir and for their fighting against terrorists. He said that the entire business community along with the nation fully support the armed forces for crushing terrorists. He said that political stability coupled with better law and order was pre-requisite for strengthening of national economy and must for survival of the country.
$37b S. Asia trade potential cannot be exploited due to Indian aggression on LoC: APBF
APBF Chairman Ibrahim Qureshi said the business community was fully supporting Kashmiris and their cause of independence. He further said that the global economy is in recession due to pandemic and bilateral trade is diminishing, however, solidarity with Kashmiris is first priority not trade with India despite the fact that economic scenario is worse presently.
Ibrahim Qureshi said that India must understand that peace in South Asia is in the interest of regional countries and the whole world, as extremism will not only damage Pakistan but also hurt India. He called upon New Delhi to abandon fanning militancy in Pakistan and opposing economic corridor which is in her own interest.
APBF chairman said the seven decades long Kashmir’s liberation movement has now entered a critical phase where it is neither a political issue nor a matter of personal or party interests, but a personal matter for every Pakistani citizen who has to play due role in it. He said Modi has waged a war against the whole humanity, and entire business community of Pakistan is standing by their valiant armed forces.